How I made a Renaissance portrait with Photoshop and a sari

The ADIM Conference
Russell Brown has been hosting the ADIM Conference for many years. In previous years, I taught and assisted with lessons. But this year I went as an attendee to literally walk in the shoes of Adobe’s customers as they learn to use Creative Cloud apps. I manage a team of UX designers at Adobe who create many of the tutorials our customers use to learn our apps. As User Experience Designers, we need to regularly remind ourselves of what our customers face everyday when trying to use Adobe products.

Each year the conference has a different theme. This year’s theme was Shakespeare and the attendees worked on two projects: a Renaissance self-portrait and a book. For the portraits, Russell invited a fabulous photographer, Joel Grimes, to shoot using lighting similar to that in many Renaissance era paintings. Most everyone brought a costume to wear for their portrait. Russell brought three – Caveman Shakespeare, Renaissance Shakespeare, and Futureman Shakespeare.

The Costume
I started with some beautiful Indian sari silk that I had purchased in Bangalore, India while on a business trip. After doing some research on 16th century clothing, I made a sketch of my idea. I decided to create a man’s costume based on the cross-dressing character Viola in Twelfth Night. It took me many weekend hours to create because I was mostly designing as I constructed. As you can imagine, I had to rip out many stitches and start over several times. 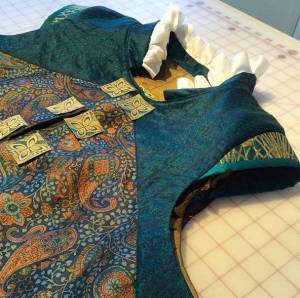 The Painting
Let me just say right now that I hate having my photo taken. I much prefer to be the one behind the camera instead of in front of it. I posed for the portrait photo along with everyone else and I really disliked almost all of mine. The only ones I liked were the ones where Russell photobombed the shot (dressed as “Caveman Shakespeare”). I returned later that evening and had the portrait reshot—this time wearing a stunning dragon mask created by costume-maker Robert LaMarche.

Once I had the photo, I started to play with it in Photoshop. We were taught several techniques on how to make your photo look like a painting. I discovered the Impression filters for Photoshop from TopazLabs and really liked them. I ended up experimenting for hours to create really cool painterly effects. Once my file was ready, it was printed onto textured, stretched canvas. I picked a gold frame, attached it, and voilá!—a framed Renaissance self-portrait made with Photoshop.

The Book
The book project had two parts. The cover was to be designed using Illustrator and because it was made of wood, it was laser cut by a Universal Laser machine. I LOVE using these laser cutters! It is so fun to design something in Illustrator and then output a three-dimensional object with incredible precision. Once the cover was finished, I started on the contents of the book.

For the inside of my book, I created a set of digital paintings with Photoshop that I printed onto heavy watercolor paper. I had created these paintings by using many of the portrait photos that Joel Grimes shot of the attendees. I chose to focus on the hands – as if it were a close-up view of a larger painting. These reminded me very much of my art history classes where the professors would show magnified views of different paintings and sculpture to discuss creation techniques and details.

The Renaissance – yet again
In 1987 I designed the first Adobe Illustrator packaging using Botticelli’s Venus as the base of the imagery. I did that because I felt that Adobe was part of a 20th Century Renaissance with the advent of digital publishing and digital art. That was almost 30 years ago and it feels like another Renaissance is happening in the 21st century as well. Artists have so many digital and mobile tools and output options at their disposal that it’s a bit overwhelming. But at the same time, I find it a very, very exciting time to be an artist.

About the author
Luanne Seymour is a designer, author, and teacher who started working for Adobe in 1986, and has written several books for Adobe Press. She’s a nerdy designer who loves to solve crossword puzzles, sketch ideas on whiteboards, and take pictures with her iphone. She looks forward to the day when she has her very own Google self-driving car. She thinks that Lego instructions are absolutely brilliant graphic design.

What we do is who we are.

Through this blog, we plan to share with you news, views, and updates related to our work. If you have feedback on Adobe user-assistance content or feel you can contribute to it, this is the place to reach us.

We look forward to the conversations ahead.