Since the first functional 3D printers were created 30 years ago they have been used to create car parts, smartphone cases, fashion accessories and even artificial organs. Not only is the technology impressive, so are the printable materials.

In this post I want to focus on 3D printing in the hands of creatives—especially since 3D printing is now possible with Adobe Photoshop CC. I’ve highlighted a couple of areas where artists and designers are doing amazing work in the hopes that it will inspire you to create. And, remember, you don’t need a 3D printer; just create/refine with Photoshop CC and send projects directly to Shapeways.com.)

Technically complex tangles
Josh Harker is considered a pioneer and visionary in 3D printed art and sculpture. He is credited as the first to break the “design & manufacturing possibility threshold” due to the level of detail in his work. Yet 3D printing has come a long way and now you can achieve this same level of detail using something like laser sintering. Don’t have the $250k laser sintering printer? Just send it to an online service like Shapeways.com; they’ll print it and mail it to your house. Or you can view (and purchase) Josh’s work on his website.

Full-color sculptures
“There is no technique that is capable of achieving such a great degree of hyper(sur)realism as 3D-modeling. At the same time, 3D printing is the only technique with which virtual models can be made actually physically touchable,” says artist Eric Van Straaten. Eric creates and prints 3D objects using full-color sandstone. More of Eric’s work.

Do it yourself: 1) Use the 3D app of your choice to create an object. 2) Import it into Photoshop CC. 3) Paint directly on the object. 4) Send to Shapeways.com from Photoshop CC for printing.

Interactive 3D voiceprint
I had the privilege of meeting artist Gilles Azzaro at 3D Printshow in NYC where he revealed an incredibly creative printed sculpture featuring a speech made by Barrack Obama explaining the Next Industrial Revolution, a creative use of multiple technologies, made possible (of course) by 3D printing. See the video of it in action.

Fashion
There are many fashion designers using 3D printing (see below) but I personally like Sebastian Errazuriz as he uses 3D printing to tell stories of love through memories of previous relationships. The shoes are just fantastic—especially accompanied by his equally enchanting stories.

3D-printed alphabet
Johnson Banks created Arkitype, an “alphabet of alphabets.” They developed a typographic 3D print of the alphabet, based on popular typefaces; it’s a must for anyone interested in typography who can handle being envious of this creative and beautiful idea. Check it out.

Functional & personalized items
There is hardly a designer out there who doesn’t have a unique iPhone case or laptop sticker. It’s in our blood to create and customize. This sets up 3D printing for a number of uses, like this iPad stand, or my iPhone case. This is one of the many items, on Shapeways.com, created by designers. Or you can make your own using Photoshop CC like I did.

Below are some additional 3D printed works to inspire you and show the different uses of 3D printing in the hands of creatives. You will see that designers and artists are using 3D printing in fascinating ways. But the question is, in this relatively new field: What will you create?

Chang-rae Lee’s “On Such a Full Sea” 3D-printed book cover. 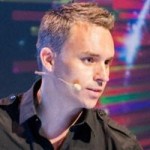 As Senior Creative Cloud Evangelist for Adobe, Paul focuses on workflows that empower creatives to create amazing interactive content for the web and mobile devices. Paul has been an Adobe Certified Instructor and courseware creator for over a decade. A writer and prolific trainer, Paul has earned top author status at Lynda.com and has created a constant stream of content for AdobeTV as well as his own tutorials on www.paultrani.com Prior to joining Adobe, Paul worked for a variety of award-winning agencies in Colorado where he calls home.