A Primer To Background Positioning In CSS

Applying background images to elements is probably one of the most used features in CSS, and many background properties exist that allow us to control different aspects of an element’s background.

Before we dig into the concepts of positioning further, let’s first have a quick look at the CSS box model and see how it affects the positioning of background images inside an element.

An element in CSS has three areas, called boxes, defined on it: the border box, the padding box, and the content box. The border box is the area of the element that includes its entire innards plus the area underneath its border.

The padding box is the area of the element that excludes the border and includes the element’s content and the surrounding padding — specified using the padding property.

There’s also a fourth area called the margin box which includes the element and its outer margin that you specify using the margin property.

When you give an element a background—be it an image or a solid color—that background is painted across the element’s padding area by default. (This behaviour can be modified using the background-origin property, but we’ll get to this shortly.)

The origin of the coordinate system in CSS is located at the top left corner of the element.

This means that when you apply a background image to an element, the browser will position the first and subsequent repetitions of the image starting from the top left corner of the padding area.

Using the background-position property we’ll talk about in this article, we can then change the position of the image inside that coordinate system.

But as we mentioned before, we can change the background positioning area and this, in turn, will change the origin used to position the image inside the element’s background area.

It takes one of three values: padding-box (which is the default value, content-box and border-box.

Depending on the background positioning area you choose, the corresponding background origin — the origin of the coordinate system established on that area — will change, and so will the initial and default position of the background image.

For each background positioning area specified using background-origin, the coordinate system will “shift” to cover that area.

For the sake of simplicity, we will not be changing the default background positioning area of the element in the rest of this article. So all of our examples will be applied to an element whose padding area is the area inside which the background is positioned.

We saw in the previous section how the background image is positioned by default at the top left corner of the positioning area. This is due to the fact that the default position value for the background-position property is 0% 0%.

The default position is a percentage value. You can supply background-position with either a percentage value or an absolute value, that specify the offset of the image from one of the positioning area’s four edges (top, right, bottom, left).

In addition to percentage and absolute offset values, five offset keywords exist and can be used: top, right, bottom, left and center.

A position can be described by specifying one offset value (keyword, percentage, or length), two offset values (a combination of two of the three possible values), or four offset values (a keyword and a relative numerical value). (We’ll talk about these in more detail in the upcoming sections.)

You can mix and match values, combining lengths with percentages and/or keywords. Note that a pair of keywords can be reordered while a combination of keyword and length or percentage cannot. So center left is valid while 50% left is not—it must be left 50%. When a combination of keyword and a length or percentage value is used, the first value always corresponds to the horizontal offset and the second value to the vertical offset.

Let’s start with how each possible value type works—this is probably the most important thing as there is a fundamental difference between the way absolute and percentage values are used by the browser to position background images. We’ll provide more examples as we go.

When you specify a position in absolute units, you’re offsetting the background image’s top left corner by the specified amount. In other words, the image will be moved so that its top left corner is positioned at the offsets specified in your background-position value.

The best way to explain and understand this is to visualise it, so here are two examples of absolute background position values and how they are interpreted by the browser to position the background image. The element in these two examples has 100px by 80px dimensions.

The absolute position can also be negative, in which case the image will be offset in the opposite direction from the edge.

Try changing the values of the background position in the following live example to see how the it affects the image. Try negative values too!

And as with absolute values, you can also specify the percentage offset in negative values, and those will move the background image by the specified value in the opposite direction of the corresponding axis. So a -10% -30% position will offset the image by 10% to the left of the left edge, and 30% upwards.

Play with the values in the following example to see how the background image position changes.

The positioning in the previous two examples is done relative to the top and left edges. Now let’s see how we can combine the offset keywords along with the numerical offset values (percentage or absolute) to position images across the background positioning area relative to any of the element’s four edges.

Offsetting Relative to Any Edge

In the examples from the previous two sections, we specified offsets and saw how they are used to offset the image with respect to the top and left edges—which is the default behaviour for one- or two-value positions.

When you combine offset keywords with numerical values for a four-value syntax, you can offset the background image from the right and bottom edges of the positioning area too.

In order to do that, all you have to do is specify the name of the edge you want to use followed by the amount (absolute or percentage) you want to offset it by.

For example, the following are examples of the four-value syntax:

If three out of four values are specified, the fourth value is assumed to be zero.

There is something to keep in mind when using the four-value syntax: When three or four values are given, then each percentage or length represents an offset and must be preceded by a keyword which specifies from which edge the offset is given. For example, background-position: bottom 10px right 20px represents a 10px vertical offset up from the bottom edge and a 20px horizontal offset leftward from the right edge. If three values are given, the missing offset is assumed to be zero. If your provide two numerical offsets and one keyword, the value is invalid and the browser uses the default 0% 0% value.

To get a better grip of this, play with the values of the background-position property in the following live example. The crane background image is first positioned so that it is offset by 0 pixels from the bottom and 2em from the right edge.

This is particularly useful for when you need to position an image at a defined distance from the right and bottom edges, which makes this task much simpler than having to calculate the relative offsets from the top and left edges.

In addition to the main background properties, an additional property now exists that allows us to apply blending effects to background images similar to the blending effects available in editors like Photoshop—specifically, the background-blend-mode property. If you’re interested in learning all about blending in CSS, you can read more about it here.

I hope you found this article useful. Thank you for reading. 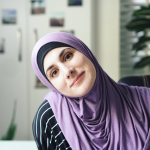 Sara Soueidan is a Lebanese freelance front-end web developer-focusing on HTML5, SVG, CSS and JavaScript. She writes articles & tutorials on front-end development-including the latest cutting edge technologies-for various high-profile magazines and on her blog. You can follow her on Twitter @SaraSoueidan