Today I’ll show how to make a realistic text effect with a tilt-shift blur, using CSS and JavaScript. This effect is nice for mockups, demos, and the like.

First, let me explain how the technique works. Since there’s no tilt-shift filter effect, we’ll have to cheat a bit. We start by putting our text onto a 3D plane.

Now, here’s the trick: we clone that plane multiple times, and then rotate (3d rotation, on the X axis) each one by a small amount around an arbitrary origin, which will be the focal point. We also have to reduce the opacity of each layer, since we are overlaying them.

Finally, in order to make the blur smooth, we just make more clones of the text and reduce the angle difference between each layer.

Now, let’s see how to implement this effect…

So far, the code creates a text layer, places it inside a container, and rotates the container to the position we want our “camera” in. Here we are also setting up the focal point, through the transform-origin property in the .layer class – the 30vh value which means that the focus will be set at 30% the viewport height. Pay attention to the transform-style:preserve-3d property on the .container class as well. That will be necessary since we will be rotating the layers inside the container while keeping its 3D transform. Now let’s see how to clone the layers and create the tilt-shift blur effect. Here we’ll use JavaScript, with a little help from jQuery:

This covers the basics of what we need to get the effect working. Then, we should set the element’s size, position, rotation, color, etc. Here’s a demo of what we’ve made so far, with a few guides to help you understand what is going on.

After that, you can tweak the effect to your liking – for instance, adding shading to the text by overlaying it with a gradient, putting a paper texture as background, and so on. I made a few examples to give you an idea.

There are a couple of details in action here: there’s a shading overlay over the text (and the background has a slight shading as well), and there’s a subtle appearance of flipped text behind the main text, to simulate the backside of a somewhat thin paper.

We can also scroll the text and continually change the focus to make an infinite scrolling animation with this effect (currently this demo works best on Chrome).

Finally, we can change the focus of the text according to, for example, the mouse’s position. Besides, text is editable in this example: to accomplish that, we set our layers as contenteditable, listen for changes, and update all layers when there’s a change in the text.

Hope this has been interesting and useful! 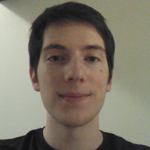 Lucas is a developer and illustrator at Garden Estúdio in Brazil. Check out his work on Codepen.