Starting on May 3rd and spanning three days, Adobe invited artists to San Francisco to create artwork, in their signature style, live on the Adobe Twitch channel. They had one challenge: use Adobe Mobile apps like Photoshop Sketch, Illustrator Draw or Adobe Capture in their creative workflow. Check out the final work created by these amazing artists:

Over the three days, he only had five hours on the stream to complete his masterpiece. To save time, he used Adobe Stock images along with Adobe Capture CC to create a vector illustration from a picture of a rose. He used the same technique for the feather and the cross.

To create the chain, he drew one link with Adobe Draw and sent it to Adobe Illustrator CC on his desktop to refine. At anytime, through-out your own workflow, you can send your drawing to Illustrator CC and keep all the vectors and layers.  Once in Illustrator CC, Rob created a pattern brush to achieve the golden collar.

Shilin Huang is a digital painter as well as a Twitch streamer. You may also recognize Chad Cameron from YouTube – he has become our very own “Adobe Bob Ross” and a Photoshop Sketch master.

To create this painting, Shilin and Chad worked in Photoshop Sketch on iPad Pro devices using an Apple Pencil. The best part about streaming live on Twitch is that we can chat with all of you. As Shilin and Chad were painting in Sketch, users in the chat pod were able to direct the storyline of the final artwork commenting “we want an octopus fighting a Bob Ross Samurai!”. After five hours of work, they merged both creations in Photoshop CC and unveiled their masterpiece.

When it comes to drawing, Mark Crilley is one of the best on YouTube. His lessons have been watched by millions of fans. We had him put his skills to the test using Photoshop Sketch for the first time on an iPad. Mark rose to the challenge and quickly created several illustrations using Photoshop Sketch.

Another YouTube superstar, Sophie Chan came on the set to give Manga drawing lessons teaching viewers how to draw both female and male characters. These lessons are based on her best-selling book Manga Workshop Characters: How to Draw and Color Faces and Figures. Like Mark, it was her first time drawing on an iPad Pro using Photoshop Sketch.

Sophie and Mark drew together on the same iPad to create one final illustration – Every ten minutes the iPad was passed to the other person. The end result? Amazing. Mark drew the eye on the left, while Sophie drew the eye on the right. Take a closer look – can you tell who did what on the rest of the drawing?

Brooklyn artist Jing Wei has a unique graphic style. She only had six hours to create an illustration using Adobe Capture CC in her workflow. Jing started out as a Fine Artist and quickly took her skills into the digital realm. To create her iconic organic shapes, she drew with paper cutting shapes out with scissors. Then using Adobe Capture CC, she converted her paper shapes into vector shapes and sent them to Illustrator CC. She asked viewers in the chat what they wanted to see in the pool: a bbq, beach ball, octopus? Working hard, Jing made sure the composition had all the right elements. After adding color to the piece, the pool party really came to life making us all wish we were out in the sun.

Katie (aka. Red Kat Creative) is a professional animator and illustrator in the movie industry who has worked on films like Star Wars and The Matrix. Using a complete mobile to desktop workflow, she took advantage of Adobe Capture to grab shapes which she used to create brushes, and then she animated her illustrations in Adobe Animate CC. Based on viewer suggestions in the Twitch chat, she also created this stunning illustration of a “Bob Ross Lizard”!

Also a renown illustrator in the movie industry, Kevin Vassey has worked for DreamWorks on movies like Shrek and Madagascar. He also has a passion for comics, so naturally we asked him to show us how to create a comic strip from ideation to completion. He started by sketching ideas with his finger on his iPad Mini in Photoshop Sketch, and finished the work in Adobe Photoshop CC. It was amazing to watch him create this elaborately illustrated story from just a blank page.

Thank you for joining us on Twitch to watch these eight artists create amazing artwork with Adobe mobile apps. Download our free apps on iOS and Android and then share your creation using the hashtag #MakeItOnMobile. Be ready for some love from the Adobe community. Can’t wait to see what you create! 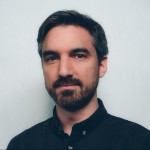