Over the last eight weeks Creative Resident Kelli Anderson has been publishing a new series of images to Instagram using the hashtag #madewithrules. As with much of Kelli’s other work, these images are based on an idea that is interesting in its own right. Each image in the series has been created by following a specific set of instructions, which she pairs with the image. Thus, all of the elements in the composition share a common organizational structure dictated by the instruction. Here she explains more about how these images work and why she is compelled to make them.

What is the #madewithrules series that you are working on?

It is a new weekly (or sometimes bi-weekly) series where I allow instructions to initiate a design project—in order to introduce a bit of randomness to the paper forms I enjoy working with. So rather than starting out with business/social objective (like in client work) or a text-based idea (like in editorial illustration work), I let a simple command kick off the process of creating. I then immediately have something “on the page” to begin responding to. For me, it is a way of getting straight to considerations internal to design itself, without wasting time thinking about strategy…or motive.

The instructions themselves range from very simple to more complex. Sometimes they incorporate outside data sources (like information captured by speed cameras in NYC) but the images are not infographics. The main objective of an infographic is to clearly communicate data. With these experiments, I am instead interested in highlighting the ways that rules affect structure in design. The data is at the service of composition (and not the other way around, as is usually the case.) We tend to prioritize data over structure for some reason! This series flips that relationship—often resulting in unexpected patterns.

For example, the first #madewithrules entailed these simple instructions:

“Lay out a 7 x 12 grid of cubic straws representing each morning hour of the 7 days of this past week. From the left, elevate the straw marking the hour that you got up each morning.”

As you might guess, the result is a grid of cubic straws, where some are elevated. What I didn’t anticipate was the sense of rhythm in the outcome—that it would look a little like music.

Why did you start this series?

I’m working on many long-term projects right now and found myself longing for a creative outlet where I could just jump straight into the designing part of design. A lot of design work (especially with long-term projects) entails extensive research, concepting, and if/then testing. All of this work happens in the conscious decision-making part of your brain, which simply gets overloaded after a while. I wanted to have an outlet to just make things. To play and be surprised. It lets me be more responsive.

Intuition is a touchy-feely word, but it is also a mode of thought based on a give-and-take with the outside world—much more conversation than monologue. It best utilizes the full set of hardware that comes with our nervous systems—including our hands, eyes, and ears which aren’t normally considered “thinking” parts of our body, but are. It drives all of the minute design decisions we make when we create anything. I wanted to get there faster.

Starting with rules rather than communication goals allows me to remain in this intuitive mode of making without having to worry about the direction it is headed.

I believe that all design is functional. All design has underlying rules, we just can’t always see them. We know a chair or a toaster is structured a certain way because it is supposed to do something particular. But even things like logos and colors have a function—they behave like little meaning-creating machines. And if you pop open the hood, there are always reasons why they do the things they do, even if we can’t see the moving parts. (Roman Mars has a great design podcast called 99% Invisible, which poetically touches on the hidden, underlying structure of how designed things work.)

I frequently point to the color khaki as an example. Khaki makes us feel like we should all be outside playing golf, right? It has this relationship to the masculine side of business culture. But “how it makes us feel” has a history. Khaki-feelings can be traced back to mythologized images of Teddy Roosevelt and other “conservationists” shooting big game in Africa. And their khaki-feelings can be traced back to the age of British colonization, whose uniforms were determined by the color of the grass on the Masai Mara.

As soon as you notice that some design (or element of design) makes you feel a certain way, you can start asking why? why? why? and uncover fascinating structural reasons. Some of these reasons are “because culture” and some are “because physics” or “because biology.” Whenever we design something we must take all relevant structural facts into consideration. And then, like a sailboat catches onto the wind to move forward, our design can catch onto the way the world is structured, harnessing it to do something. We can surf along on these rules established by our shared culture and the laws of the universe.

By turning the viewer’s attention to rules with my work—by making them the focus—I can honor their (often-overlooked) role in aesthetics and creative work. Being able to notice, be delighted by, and begin to understand cause-and-effect logic is a fundamental part of how we relate to our world. That is true whether we are designing logos, buildings, or legislation.

How do you deal with the loss of control—of not knowing what you are making?

I like not knowing things because then I get to ask questions and go exploring. My favorite projects have begun with hunches that I was unsure about. In fact, I think questions end up inspiring me into action much more often than knowledge! (Especially if I have a question that appears to be directly testable—those are the best.)

With the #madewithrules series I usually have some inkling about what approach might look good. So I shape the instructions based on a theory about what I think might work. And then I just try it out and deal with the consequences.

Giving up control is fun (really!) because it is a way to see beyond your own limited creative intent. I think that is why I also love printmaking—the process shines through a bit and you are subjected to really collaborating with the physical world and its parameters.

Name your inspirations for this project.

There is a long history, in art and design and literature, of artists ceding creative control to other processes (like automation or chance).

Some cede ALL of the control like Tristan Tzara (who developed a chance method of making cut-up dadaist poems http://www.writing.upenn.edu/~afilreis/88v/tzara.html) or purely generative art (using scripts to make visualizations, like in Processing ). Some cede only a little control as a starting point to activate intuition like the Dutch designer Karel Martens (who has a series of prints where the compositions are structured by math concepts) to Brian Eno’s Oblique Strategies (a card deck full of instructions intended to defeat creative blocks). When you cede complete control, the resulting work is more of a straight visualization of a process. However, when you cede some control, you are visualizing both the process and making the human hand evident. This strategy ends up showcasing the artist’s intentions in this really interesting way.

In our generation, Studio Moniker uses Conditional Design to make really interesting drawings and objects and digital experiments. They follow if/then rules pretty closely and even released a workbook last year which guides groups through drawings. The book is super fun—it actually gamifies drawing! Keetra Dean Dixon is another artist and designer who generates type by ceding partial control over to processes that she builds. She uses both physical processes—like pouring layer upon layer of colored wax atop a text mold—and digital processes—like running vector type through Processing scripts. We are all witnesses to “what happens,” and the results are as surprising as they are gorgeous.

As with all things, you gradually figure it all out and learn to “work with” any process to achieve a designed result. I think it is important to move on before you get too comfortable and complacent with any process.

The strongest inspiration for this project is Sol Lewitt. He is also the artist that people think of when you say “instruction-based art,” because the rules he uses are very simple. It is really easy to see how the rule informs the result. (And because he has like 600 of his rule-based wall drawings)

An interesting aspect of much of his work is that while the forms are dictated by rules, the pieces are executed by human hands. The viewer immediately relates to the wavy “straight lines” drawn by an assistant, who you just know is far better at drawing straight lines than you. This ratio of the handmade to the logical just feels right to me. Logic can be seen in both the outside world and also mastered in the human mind, but everything we make with our hands has a specific imperfect character. We have biological limitations, which is a process unto itself. These limitations preclude straight lines and perfect circles.

To catch the next pieces Kelli makes for the #madewithrules series, follow her Instagram feed. You can also take a look at other projects Kelli has done during her residency and earlier by visiting her website. 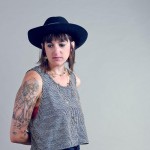 Libby Nicholaou is the Creative Community Liaison at Adobe. She holds a bachelor’s degree in English and a master's degree in Contemporary Art History. While at Adobe she's contributed to the creative community through the event series, Working Late, the Typekit pop-up library, and Typekit Studio. She's an advocate for cultivating relationships across creative industries and highlighting the talented people often hidden behind products.