“Set Out on a Joy Ride and Emerged a Winner”

Shalini Pallat, the winner of the TechComm Conundrum contest discusses her experience solving the puzzles and eventually winning. The other winner, Danielle Villegas or TechCommGeekMom has written about her experience here.

Set Out on a Joy Ride and Emerged a Winner

The challenge was too much to resist and I logged in to my Facebook account. The contest consisted of 10 questions, all related to technical communication. The clues were all cleverly hidden and each clue, though unrelated to the answers, pointed towards the answers. Most of the answers were also available on the videos on the Adobe website. I got through the first 9 questions pretty easily and quickly, thanks to good old Google, but the tenth one left me stumped for over a day. It was a series of three pictures: the first showing actors Annette Bening, Julianne Moore, and Mark Ruffalo; the second showing a logo of FrameMaker; the third showing a picture of vegetables (seemingly in a supermarket). Initially, I could not figure out what the connection was between all the three. But eventually I figured out that the three movie stars must be connected in some way. I searched the net and found that they were part of the movie “The Kids are Alright.” After that it didn’t take much time to figure out that one of the actors in the movie must have been involved with food in some way and further research led me to the magic acronym “WYSIWYG,” which was the name of the restaurant that Mark Ruffalo’s character owned in the movie. Once I typed the magic word, I had solved the puzzle. I was thrilled to have solved the puzzle and couldn’t help wishing there had been more. The thrill of solving the puzzle lasted a few days and then turned into a pleasant memory that I am sure I will cherish for years to come.

A month later, I received an e-mail congratulating me on completing the contest and winning an iPad. I could not believe it. I had set out on a joy ride and emerged a winner. Thank You, Adobe for putting together such a great contest and for the iPad. 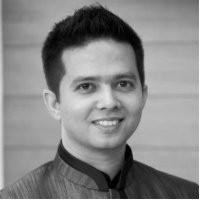